British indie rock band Citizens! released its debut album «Here We Are» in 2012. Alex Kapranos from Franz Ferdinand produced that album. According to Citizens!, without him the album wouldn’t have been as cheerful and danceable as it is. Such music will perfectly suit «Ahmad Tea Music Festival», which opens summer festivals marathon in Moscow. Keyboardist Lawrence Diamond answered Trill’s editor Oxana Melentyeva a few questions.

— What do you think of Hot Chip and Alt-J? Would you want to hang out with them before or after Ahmad Tea Music Fest in Moscow if you’ve got a chance?

Definitely. We saw Alt-J in the States and they were incredible. And Hot Chip is a massive band favorite. I like to walk around London with «The Warning» playing. Weirdly it makes me want to fight people — but in a kind way. Lots of Hot Chip songs are about boxing. Maybe we should be careful.

— Do you have a music crush on any artist? Maybe, some related funny stories as well.

We are totally in love with Grimes. We all want to date her. Maybe I’ll get Hot Chip to help me fight the rest of my band mates and then I can be crowned king of CITIZENS! and maybe then we could go out. We could listen to my Prince vinyls and fight about who owns which drum machine.

— What can you recommend to beginners in terms of being criticized and dealing with opinions of your band or music?

— What image do you have (if you have) of Russia? Maybe, of some cities like Moscow, for instance?

I can’t wait to see it. Mike’s (drummer) been to St.Petersburg before and he is always telling us how beautiful it is. I’m very excited to get there.

— Have you played in USA yet? If not what do you expect from this country and audience?

We just got back from a month tour of the USA, Canada and Mexico. It was one of our best times as a band. I miss the black coffee you get in service stations that tastes like tar, and I miss the sunshine. The audiences were amazing. We can’t wait to get back there. 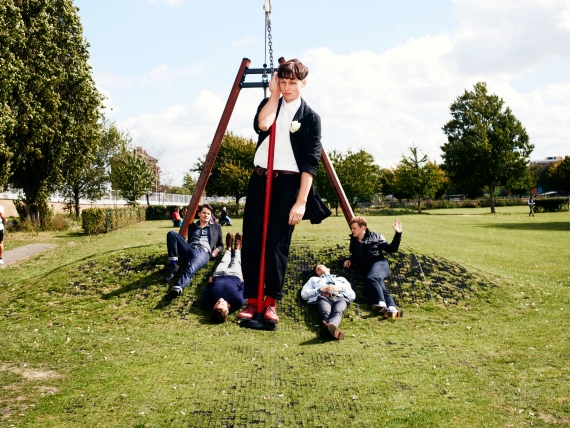 — Some bands have complaints that touring is a weird and exhausting experience and what it’s like for you?

We love it. I mean it is exhausting and weird, but you have to man/woman up. You gotta be strong. You have to face the road and defeat it and make it your servant. Large roads in America actually belong to us now after the last tour. We spent so long on them we got squatters rights.

— What album can you call as an icon for yourself? Can you also recommend to the readers some recent album that has blown your mind?

We really like Nicholas Jaar and John Talabot’s records from the last year or so. They’ve had a lot of play in the van. «Breakfast in America» by Supertramp, that’s a bit of a classic that doesn’t get its due, but it’s hard to look past Heroes at the moment. David Bowie can sit in with us any time!

— Does your debut album “Here We Are” have some influences or it’s just a music that you like to play?

Many influences that if we were to reveal them to you we would have to kill you, or at least gag you so you couldn’t tell anyone else them, and we like you so we won’t do that.

— How it’s like to work with Alex Kapranos who is the producer of your album? Would the album sound differently if you worked with somebody else?

Alex’s influence on the record was immense. He’s such a creative and talented songwriter and musician. He brought so much to the table and cared as much about our album as we did. So many producers wanted to make a cold cynical album, Alex helped us make the album that we wanted to make, no one else. I can’t imagine it without him.

— Was that your only dream to play music or you’ve got some other wishes like starring in the movie or writing a book, anything?

We didn’t really have a back up plan. Maybe we should of but we didn’t. In a way that’s probably seen us good.